I’m a ballpark wanderer.  I just can’t stay in one place when I go to a baseball game.  In each ballpark I visit, I like to take in all the special nuances and sightlines, and chat with some home-team fans.  I’m like the Kwai Chang Caine of ballparks (without the kung fu.) 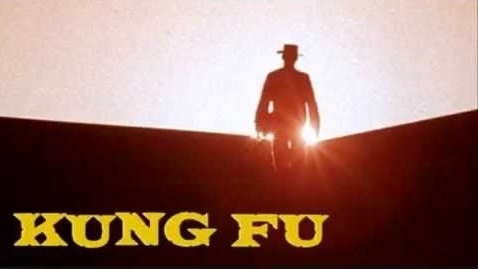 The one thing I don’t do is sit in the upper deck. I don’t do “nose-bleeds.”

The last time I remember paying for and actually sitting in the upper deck of a baseball game was my bachelor party, which started with a Mariners game at the Kingdome in 1996.

That’s not to say I don’t buy the cheap seats – I just don’t sit in them.  I’d rather hang out by the bullpen, lean on a pillar or a railing in the field-level concourse, or hang out in a ballpark watering hole.  Eventually, I’ll find an empty seat for an inning or two before I get up and wander some more.

The fact is, I’ve been spoiled.  Growing up with the Mariners in the 70’s and 80’s there was never a shortage of good seats.  Granted, I wasn’t the one buying them back then but for our first Mariners game in their inaugural 1977 season, my dad paid only $4.50 apiece for field-level seats. 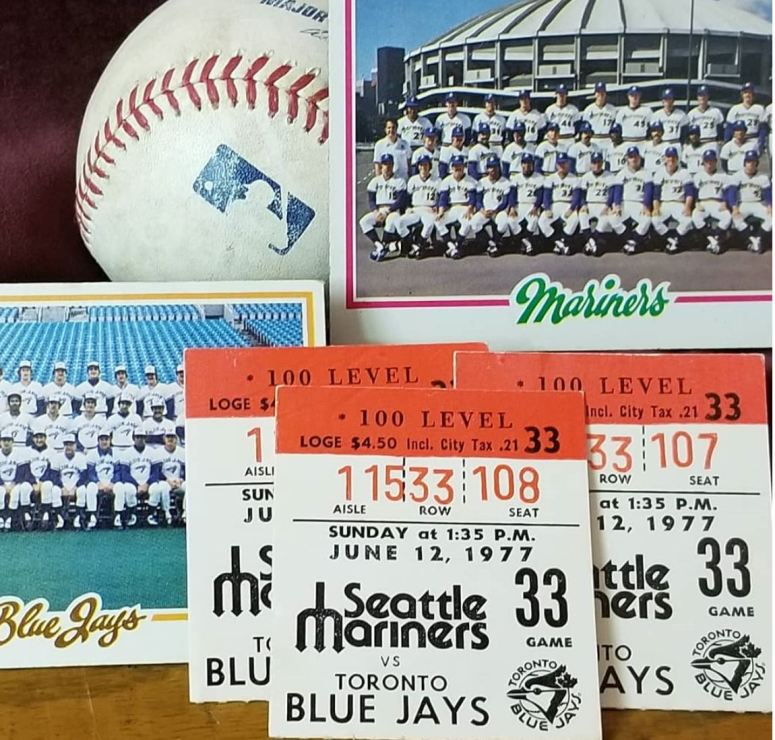 When I was old enough to drive myself to games, I could barely afford the gas to get to the Kingdome, let alone a box seat; and after college in the early-mid 90’s, we spent a lot more on our beer than we did our Mariners tickets.  My buddies and I always managed to find our way into some decent seats at the game, before closing-down the bars in Pioneer Square.

So, it was ironic that when I got free season tickets for the 1999 inaugural season at Safeco Field, I couldn’t use them.  Not a single game.

When I went to work for the Mariners full-time that year, one of the perks was two tickets to each home game.  They were great seats too.  Just past 3rd base, down the left field line, usually within 10 rows of the field.  Because I worked every home game, I always gave my tickets away to friends and family, who were just as excited to come see the new ballpark as I was to show it off to them.

I’d always tell my friends to call me when they got to the ballpark and if I could get away, I’d meet them for a little private tour.  I’d show them all the premium seating areas that I managed and as much of the new ballpark as I could, including the press box and a last stop for free hot dogs and sodas in the press dining room before they’d go take their seats.

For the 3rd game at brand-new Safeco Field on Saturday July 17, 1999, my guests were my old buddy Mac and his Dad.  The three of us share baseball connections back to our Little League days, when Mac and I played against each other and “Big John” was an imposing umpire.  By 1999, Mac and I were pushing 30 years old and playing in a men’s baseball league with more old friends.  Big John would come watch us play like we were half our age.

While I couldn’t give them a tour that day, I loved having them there and I made my way down to their seats for a quick hello as the top of the 5th inning was coming to a close.

The Padres were the Mariners opponent for the first three-game series at Safeco Field and had beaten the M’s 3-2 and 2-1 in the first two games.  As I knelt-down in the stairway, chatting with my old friends in their aisle seats, the Padres had just scored to tie that 3rd game up at 1-1.  The new and novel rolling roof of Safeco Field was extended overhead, keeping a warm summer rain off of the field but holding-in the humidity and a growing feeling of unease.

I was still kneeling in the aisle with Big John and Mac as light-hitting 3rd Baseman Russ Davis stepped into the batter’s box to lead-off the bottom of the 5th inning for the Mariners.  We were casually talking away when on the 3rd pitch of the inning, Davis hit a long drive toward left field.  The three of us rose to our feet to see the ball sail into the left field seats for the first home run in Safeco Field history!

As I high-fived my buddies and briefly celebrated with them and the rest of the 44,000 fans there that day, those words quickly jumped into my head.

Before Safeco Field opened, all employees and game day staff had been explicitly instructed to converge on the ball when the first home run was hit at the ballpark.  After a brief lapse into pure fandom, I snapped-to, and sprinted up the stairs and around to the left field bleachers (that have since been replaced) to try and find the ball. 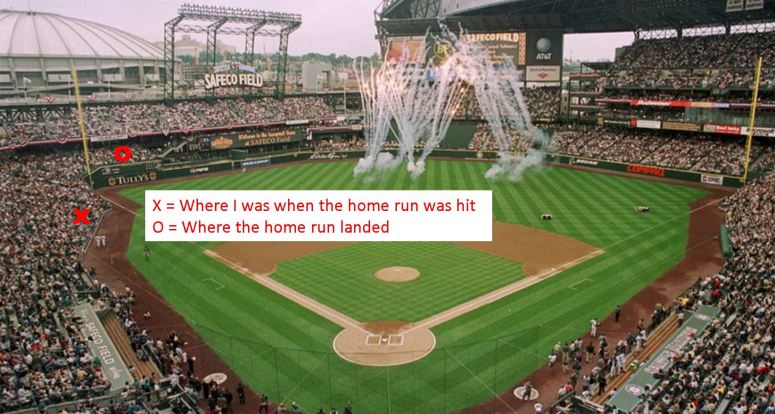 As I got there the crowd was abuzz, and an usher helped point the way to the fans who had the ball.  I was the first Mariners employee there and met the 14-year-old boy who caught it, and his very excited family.  The goal was to get them out of there as fast as possible, so we didn’t cause a distraction.  As manager of the suites at Safeco Field, I was the perfect guy to do that.

I asked the family if they’d like to watch the rest of the game from a suite and then quickly whisked them away to an empty one down the left field line, just above my friends who I’d left a few moments before.  As we made our way up to the suite, just two batters after that historic first homerun, Alex Rodriguez hit the second one.  I have no idea what happened to that ball.

On the radio with me the whole time were several folks from management who gave me the greenlight to get some basic ballpark catering ordered into the suite – hotdogs, popcorn, peanuts, etc., and told me that Neil Campbell, the VP of Ballpark Operations was on his way to negotiate.  I opened-up the suite and made the family comfortable, while catering worked on getting their food.  As we got them settled, I remember how they were getting themselves even more worked-up, talking about all the different things they were going to ask for in exchange for that baseball.

Several other employees scurried in and out of the room to see the ball, and we took pictures with a polaroid camera we kept in the owner’s suite.  Soon Neil arrived, and to everyone’s surprise, the old curmudgeon was immediately accommodating, letting them order some beer and other items off the famously over-priced inaugural Safeco Field suites menu. 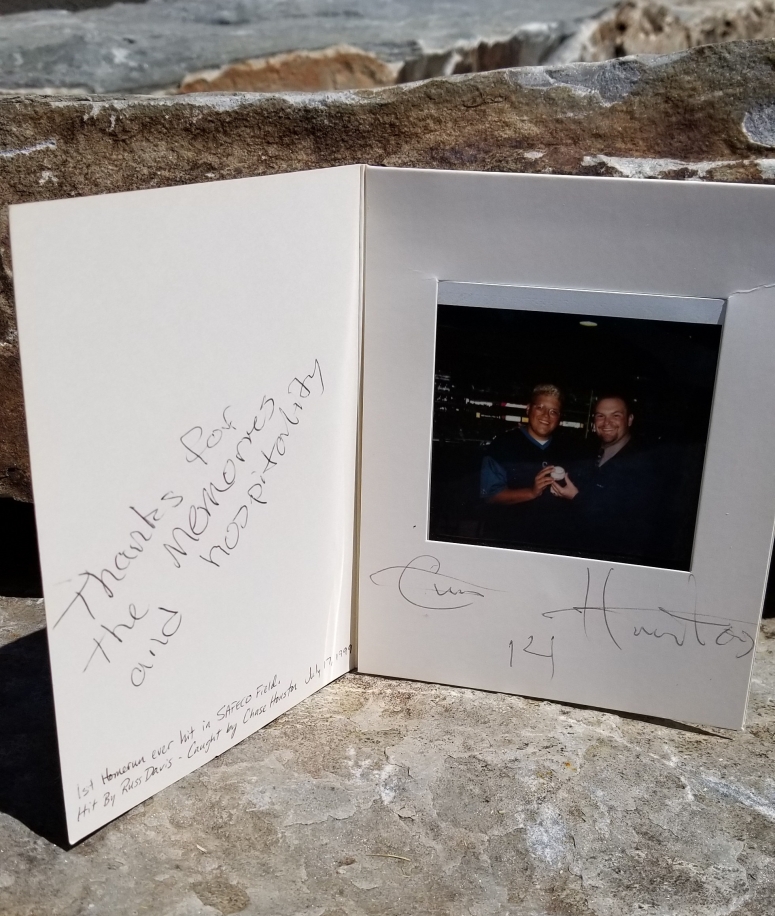 I don’t recall how long it took or exactly what combination of Mariners swag, autographed memorabilia, and game tickets with which that family eventually walked away – but it was substantial.  I checked back in on them several times after I left the suite and they were a very happy bunch.  Together, we watched and celebrated in the 7th inning as Raul Ibanez hit the 3rd home run with the bases loaded, for the first grand slam at Safeco Field; and again at the conclusion of the Mariner’s 9-1 victory – their first in the “House that Griffey Built.”

At the center of it all, was just a 14-year-old kid, a $10 baseball, and somehow,  inexplicably, me…in the right place, at the right time. 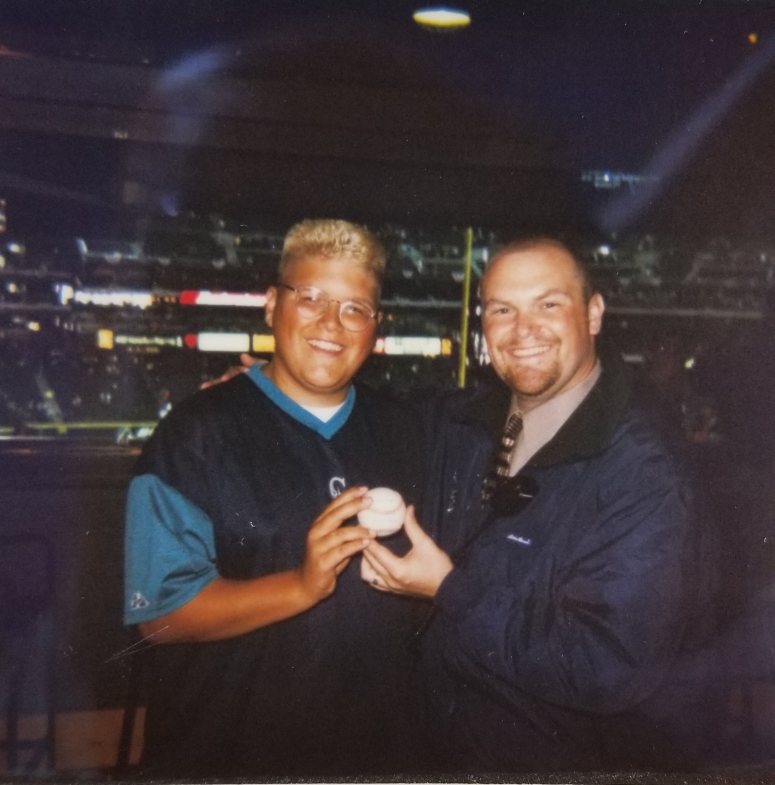