“Oh my God, you worked for the Mariners?!” It seemed like the question was sung out in unison by the team of fresh, eager faces I sat before at the Walt Disney Internet Group on an early November day in 1999. At 29 years old, I’d been on enough job interviews to have been asked some pretty difficult questions. This was not one of them.

I had spent the last two baseball seasons working for the Seattle Mariners – as a part time guest services rep. in 1998 and full-time as manager of suite services during the 1999 inaugural season at Safeco Field.

Placed on a tee, I knocked that question out of the park (pun intended) by regaling my young interview team with stories of my encounters with all of their favorite players and assurances that I still had good connections for tickets. (They also asked me if I knew how to use Outlook – pretty savvy shit for 1999 – to which I lied and said “yes.”) I got the job.

Soon after I started, the company moved from a non-descript office building in the soul-less suburban sprawl of the Eastside (of Lake Washington), to the historic Smith Tower in the heart of Seattle’s Pioneer Square. Built in 1914, it still has some of the best and most unique views in Seattle, including a straight-shot north, right up 2nd Avenue to the Space Needle; the Olympic Mountains and Puget Sound to the west; and for a brief time in 2000, the beleaguered Kingdome to the south.

In direct contrast to the art-deco inspired design of Smith Tower, the Kingdome had a well-earned reputation as a terrible venue for just about everything it hosted. Its concrete sky and astroturf field were particularly abhorrent to baseball purists. Everything about it was unnatural. The concourses were narrow, creating a cattle-call shuffle in and out of the building and long lines for concessions and bathrooms. It was shadowy, echo-y, and dank – like the brig of a submarine. 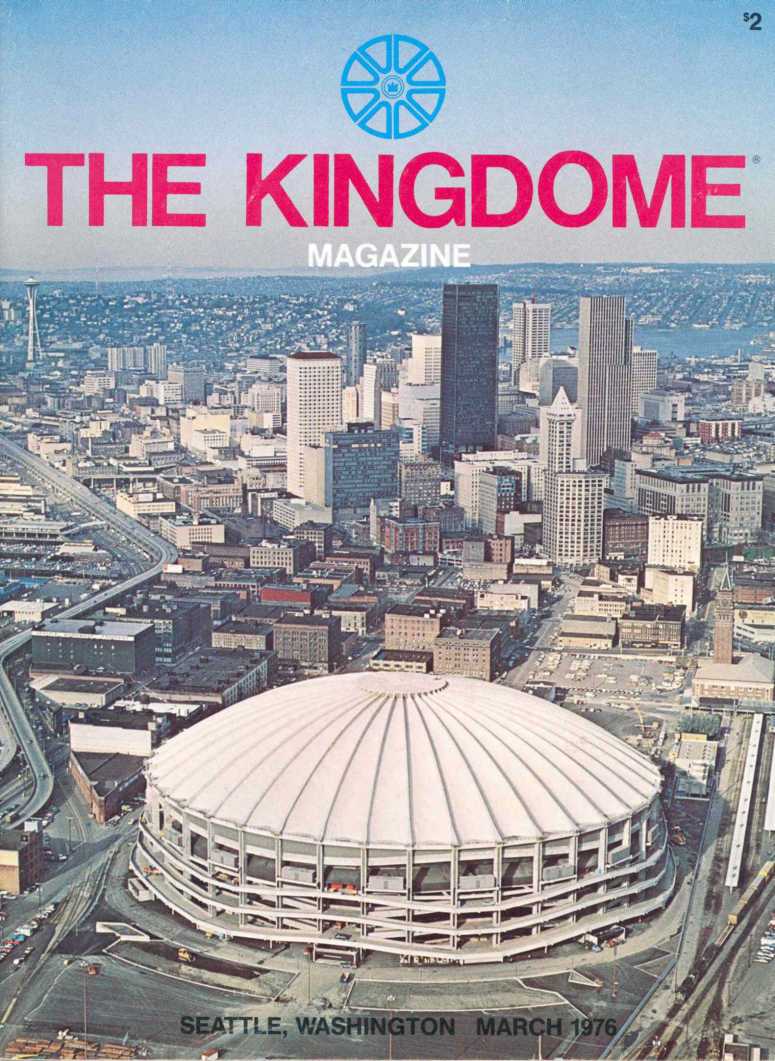 Fortunately for me, I didn’t know any better. I was not quite 6 years old when the Kingdome opened its doors in 1976. My first trip to the Kingdome was the following year, when my Dad and Grandpa took me to see the Mariners play during their inaugural season. The game was against the other brand-new expansion team that year – the Toronto Blue Jays. We ate sub sandwiches that my Mom made and packed for us. We cheered “RUUUUUUUUUPE!” every time Mariners rookie star Ruppert Jones came up to bat. I loved everything about it.

As a kid growing up in the ‘burbs of Seattle, I’d only seen other Major League ballparks on TV, so I had no tangible frame of reference. Seeing Al Cowens play the ball off the big blue right field wall and throw a strike to Spike Owen at second base was my baseball theater. The reverberant concrete dome and shiny, plastic carpet mattered not to me. Nor did bad Mariners baseball. 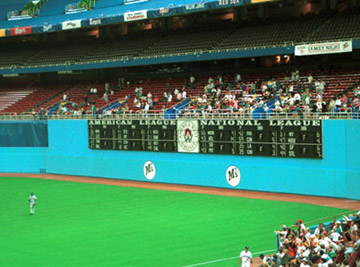 If anything, I saw them as a bonus. There were no rainouts or bad hops and you could always buy a cheap upper deck ticket and sneak into an empty seat down along the baselines (in foul ball territory.) The Green Monster of Fenway Park had nothing on the big blue Walla Walla as far as I was concerned and there’s no way Lenny Randle could have blown a ball foul on anything other than astroturf! 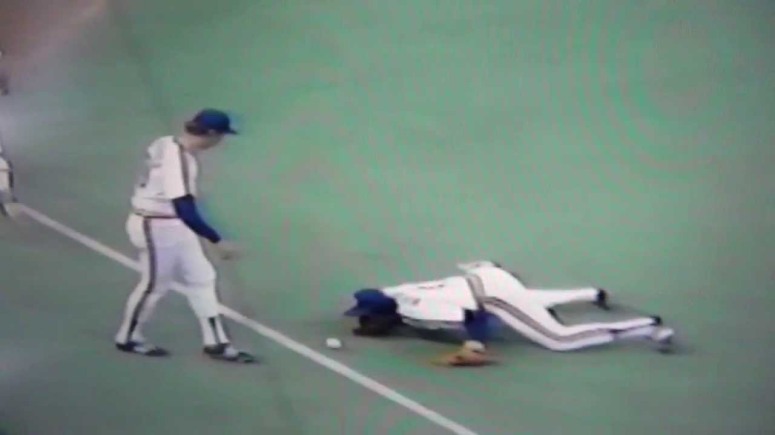 It was early September of 1995 when those baseline seats finally started to fill up and us cheapskates were forced back up to the rafters. I was 25 years old, a couple years out of college and decently employed. If I wasn’t at work or home in bed, chances are you could find me at one of two places: the Owl n’ Thistle pub in Pioneer Square or the bleachers of the Kingdome. After nearly 20 years of futility, the Mariners treated Seattle to one of Major League Baseball’s most historic runs, charging from 13 games back in mid-August, to overcome the Los Angeles Angels and into the playoffs for the first time in team history.

My buddy Hawk and I had seats in the 200 level of right field, high above the Walla Walla for those magical three games against the Yankees in the 1995 American League Division Series. I jumped up and down screaming “RUN, KENNY! RUN!” at the top of my lungs as Ken Griffey Jr. raced around the bases following Edgar Martinez’s line drive double down the left field line in the decisive game 5. With 60K other crazed fans jumping up and down after he scored that winning run, you would have thought the ceiling would come crashing down that night. But the Kingdome was bomb-proof. 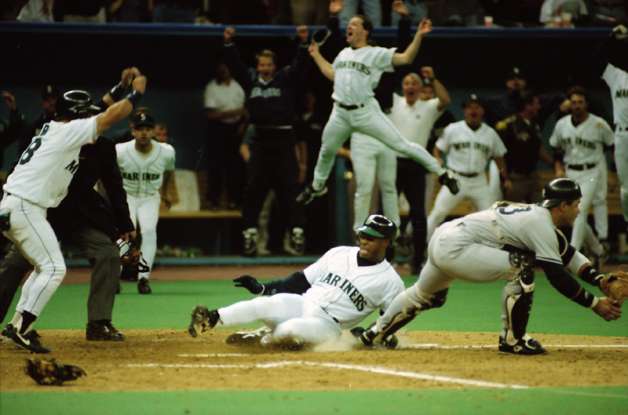 The Kingdome and Seattle rocked that night like no other in its shared history. My ears were still ringing as we slowly crept northbound up 1st Avenue. Traffic was choked both ways so I leaned out my window and high-fived the drivers of southbound cars. People were hanging off light poles. It was pandemonium in the streets. But the Kingdome was still standing.

On Sunday, March 26, 2000 – not even 5 years removed from that indelible day, I made my way back down 1st Avenue to my new office at the Smith Tower in my old Pioneer Square stomping grounds. From our office on the 17th floor, we had a perfect view south to the Kingdome. Just behind her, stood the shining new Safeco Field.

With no better view in town, I stood just blocks away at the windows of the Smith Tower and watched as more than 4,700 lbs. of explosives did what 60K berserk Mariners fans could not. In less than 20 seconds the Kingdome was reduced to rubble with her remains shrouded from sight by a rolling plume of concrete-gray dust. 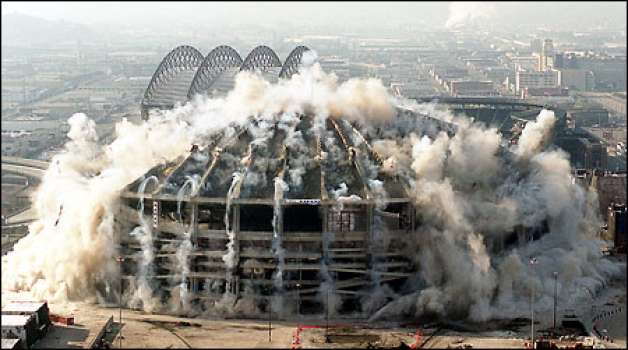 My life with the Kingdome was like that with a beloved pet dog. When she was brand new, she was the puppy everyone wanted to play with, but in what seemed like an all-too-short amount of time, she got old. First we got a new puppy to help us not miss the old one. Then we all solemnly gathered together like family does, to see our old girl put down.